After years of studying and coaching IRONMAN athletes a common fatigue theme is clear and it is called many things by different people and this plague and nuisance manifests itself as a shorter stride length. So what you say, well so what indeed, but who wants a shorter stride or even a stride that gradually gets reduced as the race progresses into the night. Is this a problem for the professionals, well I hope not as they have the time to resolve this issue but many age groupers might not, or so they think! But how important is this really and is it the only problem? Of course there are other issues associated with IRONMAN racing such as mindset, overall fatigue, gut problems, hydration, sunburn, altitude to name a few and we should look into all of these as we develop prescriptions for anyone wishing to race well. 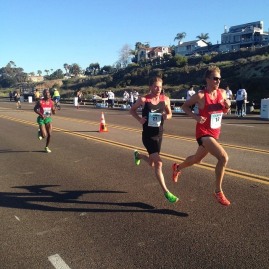 But back to the shorter stride length and current ideas which have most recently been concerned with higher cadence running as it is considered by some to be the answer, the holy grail of running fast, but lets look at sprinters for a while, is it higher cadence that wins Olympic gold, not likely, it is rather deceleration rate ie whoever cannot maintain top speed will lose. As speed is directly related to stride length and cadence of course it is true that speed is a product of the two, but what generates stride length or cadence; muscular strength and strength endurance is the answer. How to develop this specific strength is the question and when?

Which muscles do we need specifically tho, well all of them probably need to be as strong as we can make them. But your hip flexors are key to stride length and these tire and tighten easily without correct strengthening. So during the post-season, pre-season and even pre-competition you should flex those hips! Simple – run steep 200m hills, perform Knee Drives with ankle weights or band/cable machine attached and you will see amazing results very fast. Of course for the marathon and IRONMAN you will need to do lots of them and keep doing them increasing resistance over time as you get stronger and then when it comes to race day, your hip flexors wont give out and thus your stride length wont end up with the “Ironman shuffle” with a 6″ stride length. So get them done, early and often.

Cable (or Band) Knee Drives. 3 sets of 10 reps.  Using a low cable pulley and an ankle cuff attachment, stand so that the cable has pressure, but not enough to whip you backwards. Drive your knee explosively up to your chest. Keep the movement controlled as you lower. Using band will give a different feel, and thus you’ll have to really accelerate the initial explosive movement. Make sure the upper body stays tall and this will work your core as well. HIP FLEXORS